The train went all the way to Fes and it was time to move on.  But we could not leave the platform due to trains on the rails.

The medina is inside the ramparts, the king is in the palace, the sultan runs the region, the vizir runs the 5 empires, the climate is drier than the damp coastal lowlands.  By the palace walls, the left side of street is muslim and the right side is jewish.  The jewish quarter is always next to the palace.  Built in 800 and 1400 and 1900 on hills and valleys with 128 mosques, original medieval sewers.

The Muezzin call to prayer sounds like a lot of mopeds without silencers racing round the ring road.  Fes makes carpets and ceramics and leather goods.  The first ever university, khoranic school, tunnel for militia to defend the town from any attack and a system of coded birds warnings to indicate which enemy is approaching.

The tanneries are the biggest and best this side of the galaxy. Unbelievers may not go in mosques because they do not know how to cleanse themselves and lack the faith and acceptance of the prophet.

Everyone in Morocco is equal with liberty & fraternity. 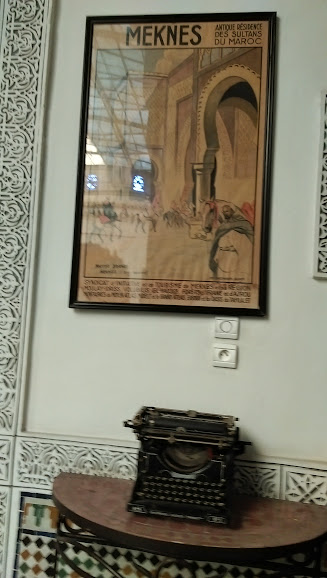 The grannies may have done their washing here,because some very big woolly knickers were seen hanging from a line in the medina.  A fumigation and bleaching operation was witnessed on the royal wedding throne and it is feared that Nannie Brock could have farted on the seat when she tested it for the size of royal buttocks.  The hunt for farting grannies with no knickers is now more urgent than ever because this could have been a treasonable offence.  Neuman has called in Interpal and Unipart and ONIOSCO to aid in solving the mystery.

International humanitarian prison visitors from Omnesti Transactional have been issued with gas masks.