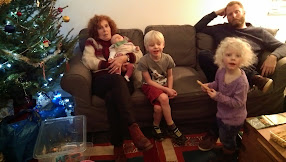 We drove to Shortlands on 21st and stayed awhile until Max & Jasper & Sarah & Sam arrived. Stayed at Glendower B & B Hotel and had a nice chicken tikka at Saffran restaurant. Full English in the morning and chatting with Mr Darby.

Christmas began on 22nd with a big dinner in The Granary.  Sue brought sliced oranges with sugar juice and I whipped cream into meringue rings and put baked  plums on top with muscavado sugar and spice.Afterwards we went to the cathedral for nine lessons & carols.

The building was packed and stewards at every turn shepherded us to unreserved seats. We each got a candle with a paper collar and a booklet with all the verses & texts.  There were people with medallions round their neck and people in white cassocks and men in smart suits and small bishops with pointy gold hats. The choir wore red gowns. The singing standard sanctified Church of Wales with a couple of Latin and Welsh items for balance.

From the lessons, we learned that the woman was beguiled by the serpent and the Lord cursed it and put enmity between it and the woman and between its seed & her seed and her seed will bruise its head and it will bruise his heel.  To the woman he said he will greatly multiply her sorrow and her conception; in sorrow she shall bring forth children; and her desire shall be to her husband and he shall rule over her. And that a rod will come out of the stem of Jesse and a branch.  Then an unlikely number of beasts will lie down together – wolf & sheep, lion & lamb, leopard & kid, cow & bear and a toddler will put his hand on the serpent’s den. From the carols we learned that all children must be mild, obedient and as good as jesus.

Altogether it was a shockingly misogynistic, sexist and authoritarian recitation of all the prejudices and self-righteousness of an 1850s male bourgeoisie. I wanted to take a photo of a row of bowed heads reading the verses of carols by candlelight, but I did not dare.

23rd We went to The Torc Theatre at Milford Haven for Cinderella. Jasper had eaten so much choc-choc that he was sick in the car en route. Pete & Sue & I sat in the front row and the ugly sisters threw themselves upon us with big bosoms and kisses.  Peter sported the lipstick marks all day.  The theatre has a full height window wall looking out over the docks & marina but the rainstorm was so vile that clouds of sleet and mist obscured all views beyond the adjacent terrace.

24th we went to a carol sing-song at the Druidstone Hotel.  The dining room was full of young families with toddlers and babies.  We got printed booklets of carols and free mince pies and a drink. A few of the resident 4-6 yr-olds sang some solo verses and we all pitched in to the general bun fight with gusto and goodwill.

25th We were treated to another Christmas at Sue & Pete’s with more delicacies drinks and goodies.