We skipped through check-in & security thanks to “special assistance” for “less mobility” passengers – excellent service, straight to the front of the queue! The only real shock was £5.50 for a sandwich in Sleazyjet.


Reading the news in the departure lounge, what a star-crossed week to pick: Prime Minister tells top civil servant to retrieve secrets about government spying on everyone’s emails and phone calls, already released in the press and on the internet: so secret service smash the Guardian’s computer and detain journalist’s boyfriend. Home Secretary tells the nation that reporter could be a threat to national security – no evidence required! Could be a story from any Middle Eastern dictatorship!

Meanwhile in Egypt: Deputy Prime Minister arrested for resigning from the post – could be imitating Pakistan with ex-minister arrested for notorious election murder many years ago. Meanwhile in London government calls for civil rights & democracy in Egypt, but dozens of private detectives warned & arrested for hacking & lying to gather info on hundreds of private individuals for top client companies; but no top companies at all warned for retaining these private eye snoopers. Thames Water private company makes record profit, set to take extra £29 from every dwelling, but PAYS NO TAX. Everywhere it’s one set of rules for the mass of the population and no rules at all to restrain those in power from the most obscene excesses and abuses.

This country for old men! Sardegna suits the over-sixties


You may be much relieved to learn that we have seen no crimes at all since our arrival and no evidence of any crimes being committed round here. But I will keep you posted if anything changes.

There is a special bench for the old guys to sit on, in the village – overlooking the main square in order to see any action; in the shade to keep out of the heat and to enjoy the cool breeze and just next to the bistro bar so as to join a game of cards or take a drink occasionally.


The address of our B & B is in Sant Antonio di Gallura, 28k from the airport. But signposting is not Sardegna’s strongest point. Sant Antonio di Gallura is a borough/county just next to Sant Elena di Gallura, not to be confused with the metropolitan boroughs of Olbia or Tempio. The county boundary of Sant Antonio is announced with a nice big signpost which could makes you think you have the reached the village of Sant Antonio. But the village is about 5k further down the road. The Lago di Liscia must not to be confused with Li Lici, which is a restaurant in the hills about 3k beyond the village and we still couldn’t see the Lago. 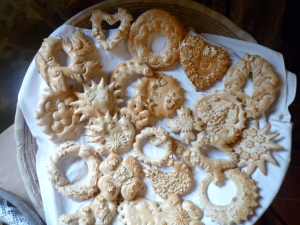 The track is not tarmac and is dangerously potholed and washed away by floods – to avoid toppling the car you have to drive in the hedge bushes at side of the track, which are a bit scratchy. Another 3k back on SS 547 takes us into Sant Antonio, where we can inquire about the hotel. Just 4 more kms gets us to the county boundary and we can see the lake at last. The hotel is shortly after the sign for the end of Sant Antonio area.

It’s in a step valley, like a volcanic crater, rich in hydrangeas & succulents & bougainvilleas & a profusion of tall wonderful-smelling lavender & petunias and near to the oldest tree in the world – the famous 4000 year old olive tree of Karanca.

The establishment is a “Relai du silence”, so we whisper considerately over breakfast by the pool and gaze in hushed wonder at the forested hillside on the far side.

There is a safe in our chalet, but it has not been tampered with at all.

Still no crimes – must be the very low levels of lead in the environment.

I once worked in a shoe-recycling plant; it was sole destroying. 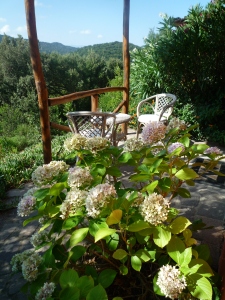 Picks to follow when we have a camera connecting cable

Soon to be released :- Finding Cannigione