DIET
Living as a committed fruitarian can be tough. Today for breakfast I am focussing on the “Relaxfirming Program”, which stresses full-cream yoghurt with fresh plums, avocado and red fruits that are rich in anti-oxidants . I’m leaving the “remise-en-forme program” till tomorrow with its plentiful waters, and its fibres, whole grains & kiwis. Yesterday the “relax-anti-age program”, I think I had slightly too many prunes and glasses of orange juice.

GUMSHOE
We have to get into San Girolamo Benedictine closed convent and find out why the herb vendor exploded on the train. So first we went to the Fancy Dress shop (negozio modas masccheria). Christiane and Rose went to the front entrance in little black numbers. I disguised myself with a dirty old habit and climbed over the back wall of the orchard. Under her new name, Sister Rimedia Odora Salvia Rosmarina Tima, was there, but I had never seen remedies & cosmetics prepared that way before. 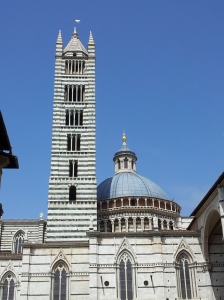 Obviously the sisters make the olive oil and wine by the traditional organic methods and I was not surprised to find them treading the grapes and working the olive press lustily while small rivulets of juicy substance trickled out and formed large droplets that jiggled gently before falling into the waiting bed of the runnel to the vat. The weather was sunny and , the white heat of the sun refracted on the walls and flagstones of convent yard. The sisters had begun their work in heavy robes but, only naturally, they got a bit hot doing such physical activities and they needed to cool off as much as possible. They sang and whispered tenderly to each other as they went about their duties, sharing Vaseline and chianti. The most amusing aspect of the scene was that they did not know that I am not a woman like them. My habit covered an altogether different configuration.

Meanwhile, at the front entrance, behind a small grill, a window slid open in the great wooden doors to reveal a spy hole. An automatic digital access device said “Entrare il suo passaporto”. On the gravel ground of the inside courtyard, just within sight, Christiane and Rosemary could see a dead parrot. So they cried out loudly “Il vostro parrotto e muerto” and an old crone hobbled out of the concierge gatehouse. She appeared to be deaf because they called out again “Il parrotto muerto”, but she did not react and they could not get in.

SIENA
Siena is divided on the postcode gang system with 17 different “contrade” protection rackets running the neighbourhoods of the town. Every street & cafe table & aspect of life is marked as belonging to one gang or another. Very rootsy, but isn’t it taking tribalism a bit too far?


In the mid 1400s the Black Death killed two thirds of the population of 130,000. The old town is built on several steep hills and the result is many streets of steps and ramps, every short walk requires lots of ups and downs.

DUOMO
This is a fine building but I understand they have to change the carpet every 3 weeks due to the numbers of people are walking round and choirs stopping to sing a few verses in the transept. Underneath the ground floor there are 4 levels of basement cellar, each about 6m high, called the crypta. In old times these were used for car parking, for storing groceries & weapons against the danger of riot and for partying. They got some famous decorators like Caravaggio in to paint the walls & ceilings and it’s all very nice. 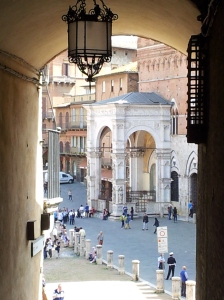 O but pity the poor tourist: sore feet, tired, limping, with a neck crick from gazing upward at domes & vaulted ceiling paintings, nursing arm ache from holding the tablet or ipad steady for filming, suffering arthritis in the Nikon finger, thirsty & parched, affected by brain ache from looking at too many Jesuses, shoulder ache from a heavy bag, wallet pain from the cost coca cola, and developing knee problems from too many stairs and steps.
In Jesus time there were many many lions in Tuscany. We have the evidence of this from the numerous statues of lions in all the churches, chapels, squares & public buildings. One PhD student from Oklahoma University counted 422 lion statues in Piazza del Duomo neighbourhood alone.

MONTE DEI PASCHI
Monte Dei Paschi founded in 1472 is the Godfather bank with its HQ in one of the finest medieval palazzos of old Siena. They were looking for a popular sport to sponsor because soccer had not been invented and someone thought of horse-racing. So they hung out banners and gave the riders shirts with the bank’s logo and it all worked a treat and so was born the annual Palio in the Campo square, and loads of other sponsored civic services. Monte dei Paschi became “Babbo Monte,” or Daddy Monte, the city’s largest employer and greatest patron.

Going back into the mists of time, it paid for charities and civic works. The charitable Monte dei Paschi Foundation, has long operated as a sort of shadow government here, as banks controlled by politicians provided loans and jobs in return for votes, and sponsored charities and civic organizations to buy good will. The chief financial officer of Siena’s soccer team, likened the system to the way the Roman emperors kept their citizens happy with bread and circuses.

In January, Beppe Grillo, delivered a tirade about Monte dei Paschi’s longtime connections to the Democratic Party, which for decades was the dominant political force in the city.

The bank’s real problems began in 2008, when it bought another bank, from Santander. The price of 9 billion euros ($11.9 billion) was regarded as wildly inflated, and to make matters worse, Monte dei Paschi paid cash. In order to pay this, Monte dei Paschi raised about a billion euros with securities that deliberately confused whether the repayment notes were bonds or shares. The Italian Central Bank thought Monte dei Paschi concealed certain features of the transaction, and said: “M.P.S. did not disclose to the Bank of Italy significant parts of the operation in question”. 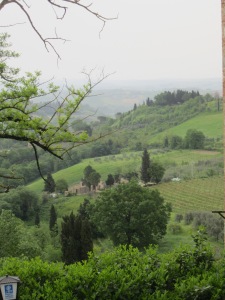 I read today in International Herald Tribune that 4% of Neanderthals in Europe survived and moved to Billiricay. This has been proved by DNA tests, and they practised cannibalism just like the early settlers on East coast of US.