Today  we had a day “at leisure”, so outside the hotel we just hired camels to go wandering freely around the desert.  We headed in the direction of a place called Seb Raqeem, which has apparently been there for ages and has a nice restaurant.  The camels  got separated and, of course,  the battery on their satnav was dead, so we were soon completely and utterly lost in these steep hills of rock & sand-stone.

The hills are not entirely barren as there are some primitive dwellings and houses and even caves carved out of the rock face, with residents who have very red cheeks, we nicknamed  “the redfaces”,( who are called Edomites by the authorities).  But the area seems to have been settled more recently by nomadic immigrants from Yemen & Saudi who are called Nabateans.  Their writ stretches from Saudi & Yemen in the South to Syria & Lebanon in the North and they look to be highly networked.

As our camels wandered aimlessly around the dunes and tracks over small mountains and down dried-out wadi  river beds, we realised that these people have made a kind of civic settlement in this rocky region.  Some aspects of the hillsides are almost covered with quite simple caves, for a virtually troglodyte lifestyle.  But as we plodded on towards an opening between the hills, these dwellings ceased and we found ourselves trekking gradually into a tall pass.  The hillside got steeper and steeper until it was a vertical rock-face in dark red & ochre sandstone . 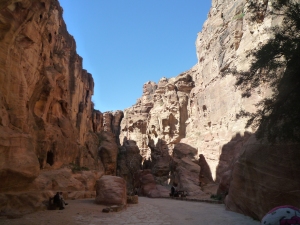 We had no other option but to let the animals follow their noses along the only viable trackway which snakes downwards and into an ever narrower gorge.   No more houses but the track is paved with rock flagstones, deep channels are carved out of the sides of the canyon and decorative niches appear in the walls of the gorge.

The sides of the canyon rose up 700 metres above us and gave us shade and some protection from the sun.  We trekked us for a mile or so, always in a downwards direction, into darker shade on both sides, with no visible exit on either left or right.  Some very large, and evenly carved & polished blocks sat near the path, with what meaning we knew not.

And then suddenly, directly ahead of us, we perceived glaring bright sunlight reflected off a towering rock fascia apparently built as a most elaborate temple with columns, and pediments and decoration in the Greek & Roman style and with statues of twins Castor & Pollux on either side.  This was defended by guards wearing shiny metal armour over a Roman tunic uniform and bearing arms.

What a surprise!  Then we realised that this impressive temple sits in a clearing at the centre of the canyon with numerous other buildings around te sides – all carved out of the rock, not erected in the usual way.   And these buildings have been covered to a great depth by sand and stones and rockfall debris, so that the original floor level  & street level are currently about 6m down below the surface.  Much more digging will be required to reveal the full elevation of most of the structures.   Inside this temple are burial chambers and sarcophagi for a whole clan of rulers.

Continuing along the canyon many more structures i different styles were to be seen, some in the fashion of Yemen buildings and others like Greek or Roman or Ottoman places of worship – but all serve only as burial chambers and no doubt for important pagan religious worship ceremonies.

A delightful fresh breeze blows through the canyon and makes the passage a pleasure to enjoy.  But our camels were tired and thirsty, so stopped for refreshment under a pistachio tree which is apparently 485 years old.  People told us that Moses had passed this way about 3200 years ago with his followers, looking for a promised land.

The indigenous people worship a deity called “Douchara”, but there is absolutely no sign or representation or figure of their god save the big blocks of stone which I described at the entrance to the area.  There was a population of 50,000 people in this hidden capital city of the Nabateans, and traders came from China and Africa and the East and Europe, with caravans of 2000 or 3000 camels bearing goods to exchange or trade or to do other business in his place which is called Petra.  They carried frankincense and myrrh and salt and bitumen and vegetables and exotic spices and every kind of trade goods.  And they had coins struck in silver and copper and gold.

As it has not been excavated yet it is remarkably easy to find treasure which was buried as grave goods with the rulers coffins or simply items of value which were hidden or abandoned in the town.  You need only to scratch in the drains or look between the paving stones or inside the chambers to discover coins and figures in precious metals such as gold or silver or copper.

We quickly unearthed a Lion’s Head in gold which is approx 70cms high by 50 x  50.  Also pots & jars and jewellery and tools and papyrus scrolls and innumerable everyday objects  abound on the site.  When the great King Aretha 4th died, his second wife ruled for a period as the prince was still a minor.

The canyon throngs with camels and donkeys and asses and horses and horse-drawn carriages, bumping along on centuries-old paving.  The young men take manly pride in racing their carriages, cutting each other on corners and proudly showing the elegance of their horsemanship to the many visitors passing through from Russia and China and Philippines and Latin America and Spain.

Elderly, infirm or physically disabled people or pregnant women or those with small babies are not welcome since no effort is made to devise ways they could get around the site in comfort.  The system of transport is shambolic and the tourist staff are much more attentive to maintaining their extensive networks of friends, relations and professional contacts on the site than to relating with their clients.

It is a marvel, a feast for the eyes, a history lesson, an architecture lecture, a cultural exchange, a centre of religious ceremonials, a comparison of beliefs and after-life myths and mythologies, a wonder of construction, the capital of a large kingdom a nexus of government and administration, all hidden in the mountain canyons until very recently.  Worth a look.

3 thoughts on “A day at leisure”