There was a loud honk on a car hooter, a shrill blast from a whistle, a cacophony of shouting, an almighty bang and … the boot of the van slammed shut, and …  the airport terminal at Amman is traffic hell.

Prince Ali was descended directly from the prophet.  He left Saudi (Omar Sharif in Lawrence of Arabia) to run the insurgency against the Ottoman Turks in the early 20th century. With encouragement from the Brits he succeeded and they sliced up the territories and promised that his clan could rule over all of all Arabs from this new country.   So his son became King Abdullah 1st, followed by grandson King Hussein and the rest is history.  But you can’t trust the Brits, and of course, they reneged on the deal.

The Old Testament counts for a lot in these parts and Abraham was round here with Job & Aaron and Lot’s wife turned to salt and our driver-guide keeps testing the shameful limits  of our ignorance.  The worst embuggerance of it is that we still don’t know what happened to Moses after he went to the summit of Mount Nebo.  Why was he missing for forty years and what was he doing during that time?  Did he take a look at the promised land and change his mind?, or was he the first victim of a special rendition? 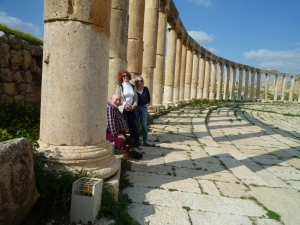 coins are washed out of the paving stones and can be snapped up. During our visit, the magnificent amphitheatre was occupied by three retired Jordanian military gentlemen in traditional Bedouin costume playing Scottish tunes on bagpipes.

Please try to stay with the program and if anyone can tell us what Moses was doing for forty years, please advise.

2 thoughts on “Bagpipes in Jerash”